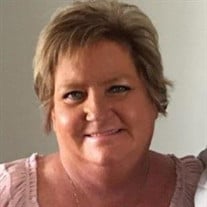 Rebecca Diane Gilbert Lawson, 56, of Ringgold, Georgia passed away Tuesday, May 3, 2022. A lifelong resident of the Ringgold area, she was of the Baptist faith. She is preceded in death by her father, Raymond Earl Gilbert; brother, Michael Earl... View Obituary & Service Information

The family of Rebecca Diane Gilbert Lawson created this Life Tributes page to make it easy to share your memories.

A comforting word from you means a lot.

Send flowers to the Lawson family.